Astaxanthin and the Health Benefits for You

Astaxanthin and the Health Benefits for You

What is Astaxanthin? As we age, it’s natural to feel […] 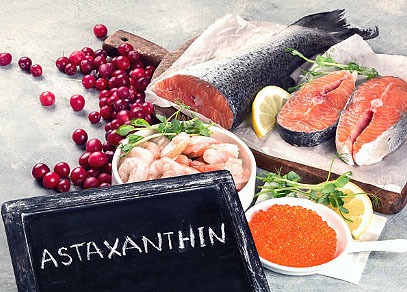 As we age, it’s natural to feel like the body slows down, your skin feels different, and illness and disease may become more common. Many of us start to wonder what we can do to keep our bodies working optimally. One of these nutrients you might not be familiar with is astaxanthin.

What if there was one thing you could add to your health and beauty routine that could improve your body’s defense against stress and aging? The secret may lie in increasing your intake of specific nutrients with antioxidant properties to reduce oxidative stress that damages cells.

Astaxanthin is a red carotenoid phytochemical primarily produced by microalgae but also naturally occurring in other sea creatures like salmon, krill, crayfish, shrimp, trout, and crustaceans. It can be found in yeast and the feathers of certain birds. It’s what gives these plants and animals their bright coloring.1

Out of the 1,100+ documented carotenoids,2 astaxanthin is one of the most successful on the market3 and is often referred to in the popular press as “the King of Carotenoids.” Evidence shows that it’s one of the most versatile and potent antioxidants in nature.

While you certainly ingest astaxanthin when you eat natural sources of it in your diet, most foods don’t contain sources concentrated enough to provide the benefits you might seek.5

For example, wild Pacific salmon offers 3 mg of astaxanthin per 5-ounce serving—more than any other seafood. But with a supplement, you can get much more of this incredible nutrient.

Astaxanthin can cross the blood-brain barrier, something many antioxidants and carotenoids cannot do. This means that the brain allows it to pass through itsu.6

Because of this direct contact, human research shows that supplementation with astaxanthin increases the amount of the carotenoid circulating in blood and brain, making it more readily available for use by the body.7

In fact, through its unique pathways in the body, supplemental astaxanthin has been found to offer the following benefits:

Ongoing, uncontrolled oxidative stress can increase the risk for conditions like heart disease, cancer, and type 2 diabetes.9 Free radicals are also thought to play a role in promoting many common complaints of aging, such as wrinkles.10

As the body ages, the ability to fight off free radicals declines. Regularly providing a concentrated source of antioxidants can help the body strengthen its free radical defense system.

Here are just a few of the research-backed benefits of supplementing with this powerful antioxidant:

Because of its ability to cross the blood-brain barrier, astaxanthin has been researched for its protective role against neurodegenerative diseases.11 Its primary target organ seems to be the brain.3 In fact, astaxanthin may be the most effective antioxidant for the central nervous system overall.

Research suggests that the internal antioxidant defense system becomes weakened and less effective with age. In other words, the body struggles to maintain optimal levels of the antioxidants normally produced in brain tissue.

This is a major problem when it comes to protecting against oxidative stress, as people are continuously exposed to environmental contaminants, pollutants, and other stressors in everyday life. These continual offenders assault vital organs, including the brain and eyes.

Once astaxanthin crosses the blood-brain barrier, it can help protect the eyes from light exposure and inflammation, as well as damage to vision-related cells and neurons.12

In animal studies, astaxanthin showed neuroprotective effects and improved spatial memory in mice.13 Furthermore, astaxanthin may be helpful in maintaining memory that can become impaired with aging and cognitive decline. In a double-blind, placebo-controlled study, the effects of a supplement containing astaxanthin improved processing speed related to performing complex tasks among patients with mild cognitive impairment.14

Astaxanthin has also helped individuals with age-related forgetfulness. Those who received a daily capsule of an astaxanthin-rich extract for 12 weeks showed improvement in cognitive function.15

Evidence strongly suggests that a daily astaxanthin supplement may be promising for people who want to prevent cognitive decline and related diseases as they get older and maintain overall brain health.16

Astaxanthin may be beneficial for supporting eye health. Studies suggest that this powerful antioxidant can help restore cellular balance in the eyes.17

While a nutrient-rich diet and regular physical activity can help combat fatigue, sometimes it’s not enough. Astaxanthin supplementation can provide the extra boost of energy you need to keep going. It turns out that oxidative stress may play a role in the mechanism that creates fatigue.

One study provided 24 healthy volunteers with 4 weeks of astaxanthin-containing supplementation, followed by 4 weeks of a placebo, and evaluated its effect on reported fatigue. After each study period, the participants’ fatigue was assessed through mental and physical tasks. Compared to placebo, astaxanthin supplementation was associated with significant improvement in recovery from mental fatigue.19

Poor blood sugar regulation can be largely influenced by oxidative stress and inflammation. Astaxanthin supplementation has been found to positively influence factors that can improve blood sugar balance by directly acting on a number of cells involved in poor blood sugar control.

A randomized, placebo-controlled trial examined the effects of 8 weeks of astaxanthin supplementation on blood markers of people with type 2 diabetes. Researchers found that the antioxidant had positively impacted blood sugar control, insulin sensitivity, fat oxidation, and weight. These effects were substantial enough to indicate that astaxanthin may be a promising complementary treatment for blood sugar regulation and the secondary effects of diabetes.20

Our skin is the first thing exposed to the elements, and this can take a toll. As we get older, skin appearance, moisture, elasticity, and texture tend to naturally decline. This is largely due to factors like hormonal changes, long-term exposure to sunlight, and other stressors.

There’s good evidence that astaxanthin supplementation in humans may be a safe and effective way to protect the skin from damage.

A double-blind placebo-controlled study examined the effects of astaxanthin supplementation on UV-induced skin damage. Following 9 weeks of supplementation, the astaxanthin group showed less skin moisture loss and overall deterioration compared to the placebo group. Researchers concluded that astaxanthin could be an effective tool for skin protection.21

In another 8-week study, 30 healthy female participants were given daily supplementation with 6 mg of astaxanthin by mouth and 2 mg of astaxanthin applied topically. They showed improvements in crow’s feet, age spots, skin elasticity and texture, and moisture.22

Heart disease is the leading cause of death worldwide, with stroke coming in as number two.23 Animal studies have found that astaxanthin can help lower blood pressure and stroke risk by inducing nitric oxide-mediated relaxation of the blood vessels.24

In a prospective study of heart failure patients, researchers found that 3 months of astaxanthin supplementation reduced oxidative stress and improved exercise tolerance. The findings suggested that astaxanthin-induced decrease in oxidative stress has the potential to participate in the maintenance of normal heart function.25

Fertility declines for both sexes with age due to damage caused to eggs and sperm largely by ongoing oxidative stress. Astaxanthin may be beneficial in restoring some of that fertility, especially for men.

In one study, 30 men who experienced infertility for at least 12 months received either 16 mg per day of astaxanthin for 3 months or a placebo. After evaluating numerous fertility biomarkers, researchers found a positive effect of astaxanthin supplementation on sperm parameters and male fertility, though larger human trials are needed to confirm this finding.26

Cancer is a disease with many potential causes. The research supports limiting free radicals in the body by using antioxidants to help combat these dangerous cells, indirectly reducing oxidative stress and potentially helping lower the risk of certain cancers.27 As a powerful antioxidant, astaxanthin may also have this effect.

One lab study found that astaxanthin produced by fermenting yeast was able to slow the growth of skin and breast cancer cells without killing healthy cells.28 Similar results have been found in lab studies using an astaxanthin-rich microalgae extract to inhibit colon cancer cells.29

Due to the complexity of the disease, designing a human study to demonstrate how astaxanthin can reduce the risk of developing cancer would be challenging because there are so many other factors involved. But it remains promising as another one of the many antioxidants that play a significant role in prevention.

Animal studies have found that astaxanthin supplementation increased the body’s use of fat for fuel during exercise, which translated to increased endurance.30 Because of this, there has been considerable interest in using it to improve physical performance in humans.

Human studies have shown that astaxanthin’s antioxidant abilities may improve muscle performance31 and endurance,32 but more research is needed to determine if these results are similar to those of other antioxidant supplements.

How to Use Astaxanthin

Astaxanthin is incredibly easy to add to your existing daily health routine and will have you reaping its benefits in no time.

Though it can be beneficial for everyone, astaxanthin may be particularly beneficial for those already struggling with a chronic condition or at high risk for inflammation and oxidative stress. It also has minimal reported side effects. It should not be taken by women who are pregnant or breastfeeding due to the lack of long-term clinical research in this population.

If you use medication, speak to your doctor about the appropriate use and individual benefits of taking astaxanthin. Astaxanthin may increase how fast the liver breaks down some medications, which may interfere with their effectiveness.

The key is to choose an astaxanthin supplement with a high antioxidant concentration that’s manufactured in a facility you can feel good about. Astaxanthin made from Haematococcus pluvialis microalgae may also have environmental benefits. It is important to choose a high-quality astaxanthin product, not the cheapest one, to ensure its effectiveness.

Living in a time of high stress, poor dietary choices, and daily exposure to external contaminants, we face more challenges than ever in preserving our health while aging. Along with the other health-promoting things we do to support our bodies, supplementing with strong antioxidants like astaxanthin may aid us in the fight to stay healthy.