It’s no secret that changes in health are a part […] 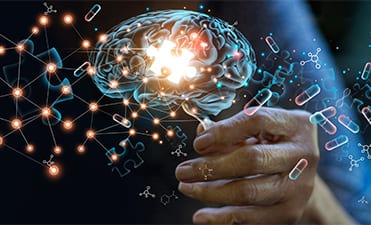 It’s no secret that changes in health are a part of getting older, especially when it comes to your brain. With the growing aging population and increase in neurodegenerative diseases like Alzheimer’s, you might be wondering how to keep your brain healthy. Research shows that physical activity and a nutritious diet are important for the brain, but other natural therapies are also emerging, such as astaxanthin. What is astaxanthin and how does it relate to Alzheimer’s? I’ve got these answers for you!

Astaxanthin is a carotenoid, which is a class of pigments responsible for the yellow, orange, and red hues of fruits and vegetables, autumn leaves, and even flamingo feathers. Most astaxanthin is made by bacteria, microalgae, and yeast in the ocean. Salmon, shrimp, and lobster get their coloring from eating a lot of astaxanthin.

Astaxanthin is known for its antioxidant and anti-inflammatory properties, which support immunity.2 It’s considered one of the strongest antioxidants in nature because of how well it targets free radicals and prevents oxidative damage in the body.

The incidence of Alzheimer’s disease has increased significantly, now affecting one in five adults over the age of 65 around the world.1 Alzheimer’s is characterized by worsening memory and brain function, often experienced as forgetfulness, mood and behavioral changes.

Astaxanthin is studied for its potential role in Alzheimer’s disease. It can cross the blood-brain barrier, where it can directly impact the brain and potentially prevent or slow changes.9

A 2018 study found that supplemented astaxanthin built up in the hippocampus and cerebral cortex of rats, two major areas of the brain affected in Alzheimer’s.3 The hippocampus allows you to form memories, learn, and express emotions. The cerebral cortex protects the cerebrum, which is responsible for thinking, perceiving, processing, and understanding language. In Alzheimer’s, these areas of the brain atrophy and become less functional.4

In another study, 21 healthy participants aged 50-79 with mild cognitive impairment were given either a placebo or an astaxanthin-containing supplement daily for 12 weeks. Brain function was measured at baseline, 6 weeks, and 12 weeks. Those in the astaxanthin group had a significantly improved ability to understand, react, and perform complicated tasks.5

Where to find Astaxanthin

If you don’t like seafood, that’s okay! Astaxanthin is also available as algae supplements, which include mostly man-made astaxanthin. Although the antioxidant and anti-inflammatory benefits of this version are not quite as high as from natural sources, supplements are an easy-to-use and widely available option.

How much Astaxanthin should I eat?

Some research suggests at least 3.6 mg of astaxanthin per day, which can be found in 165 grams (about 6 oz) of wild caught salmon.6 Astaxanthin is also added to feed for many farm-raised fish.

The recommended dose for astaxanthin supplements is typically 2-4 mg per day.6 Because astaxanthin is fat soluble, supplements should be taken with foods rich in healthy fatty acids, like chia and flax seeds, fish, nutella, almonds, or walnuts to increase absorption.

One great way to incorporate astaxanthin into your diet is with Vision Clear, which contains a powerful blend of antioxidants for both your eyes and brain.